London College is situated in the heart of the City of Port-Louis, at 30 R. Seeneevassen Street. The three-storey building accommodates 1400 students and a staff of over 75 members. The school offers classes of Form I to Form VI (HSC). The students are between 11 and 20 years of age.

On 10 January 1966, London College opened its door at 34, Remy Ollier Street, Port-Louis with a population of less than 100 students despite the visit of cyclone "Denise".  At that time the school fee ranged from Rs. 6.00 for Form I to Rs. 14.00 for Form V.  A teacher holding a School Certificate was paid Rs. 125.00 and those holding a Higher School Certificate Rs. 275.00 monthly.

At that time, the school was offering scholarships to the two best academic students of each form. The aim was to encourage students to strive harder.

Due to the growing number of students who wanted to join London College, a second department was opened at Pope Hennessy Street, Port-Louis in January 1968.  In that very year, London College was awarded the "B" Status by the Ministry of Education - which constituted a record.

On 21 December 1972, Sir Satcam Boolell, the then Minister of Agriculture inaugurated the London College school farm at Petit Verger, Pointe Aux Sables.  Although situated in an urban area, London College was the first institution to have introduced Agricultural Science in its curriculum.  The management strongly believed that the teaching of agriculture to our youngsters was of vital importance to meet the country's needs in this field.

Due to the very high demand for admission to London College, the Management decided to buy a plot of land in the heart of Port-Louis in February 1973 and erect a modern educational complex instead of opening other departments scattered in the city and at the same time to centralise the other existing departments.  Thus in January 1974, the first phase of the main department was opened at 30, R. Seeneevassen Street, Port-Louis.

In 1974, London College was awarded the "A" Status by the Ministry of Education.

As time went on, new subjects like Fashion and Fabrics, Home Economics, Computer Studies were introduced along with the traditional subjects like Biology, Chemistry and Physics, Economics, Art and Languages.

The introduction of HSC classes was felt as the students, after completing Form V, had to leave the college to pursue their HSC in some other college.  In 1989, London College was given the green light to run HSC classes.

On 3 June 1991, the London College Anthem, written by Mr Georges Meurier, was launched.

"Information Technology" is becoming a crucial tool in the world today and in years to come.  To keep pace with the trend, London College has already introduced Computer Studies since January 1995.  Today, we are proud to announce that we have 100% of passes in Computer Studies at School Certificate, every year since 1997. We have already introduced Computing at HSC Level.

For the Pearl Jubilee, in 1996, another Science Exhibition on the theme "Technology of Tomorrow" was organised at the seat of the college itself. For this event, Rocks from Antartica were the main exhibits. These rocks were offered by the Indian High Commission.

In 1997, London College also participated in the National Quality award organized by MEPZA and was awarded a "Special Mention" in the Education sector.

All these recognition/awards given to London College by highly recognized institutions is a proof that London College has reached a high standard and you can rest assure that the big family of London College will continue to work for the progress/advancement of our country.

On 6 November 1998, London College was awarded "The Medal Of The City Of Port Louis" by the then Lord Mayor Mr Luc MARIE.

In 1999, London College started an educational and cultural exchange programme  with the students of College de Trois Mares of Tampon, Reunion Island. This exchange has benefited  the students and staff of both institutions. In the future this kind of exchange may  be extended to other countries in the Indian Ocean and hopefully to other continents.

On 6 August 2000, Mr Wills LEE SOK HING was appointed Rector of the college.

In 2001 for the 35th Anniversary of the college, another Exhibition was organised at the seat of the college.  It was a real success.

In 2006, the college celebrated its 40th Anniversary with special motto "Excellence is our goal".

On 26 February 2008, the first college Human Rights Club was officially launched at London College by the Honorable Rama VALAYDEN, Attorney General and Minister of Justice and Human Rights.

On 27 January 2010, London College has donated Rs 105,000.00 to Haiti Teledon organised by the Government of Mauritius with the help of the Municipality of Port Louis. 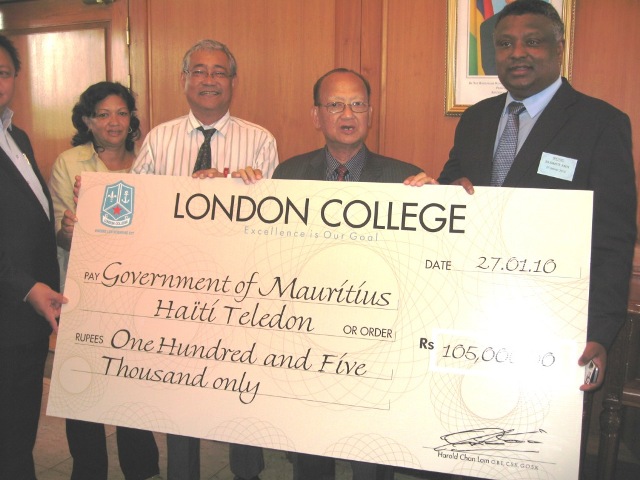 In the same year on 26 August, the college donated Rs 56,070.65 to Teledon for Pakistan, organised by the Municipality of Port Louis.

In 2011, London College celebrated its 45 years of existence.

In 2016, London College celebrated its 50 years of existence and our motto is still "Excellence is our goal" to show our commitment to quality education.